Thomas Huebner is a passionate VR photographer. On Meta Quest 2, it shows blueprints of a quality you rarely see.

Immersive photography and videography are still in a niche. Playback devices, i.e. VR headsets, are nowhere near widespread enough to warrant camera makers investing heavily in this technology. As a result, there are few affordable and good quality VR cameras on the market. High-end products are usually expensive or so complicated to use that they are only suitable for enthusiasts.

Since there are no VR cameras for the mass market, good content is limited, which in turn prevents wider adoption of the technology. It’s a vicious circle that the VR industry knows all too well.

Low-res, washed-out, or grainy VR images: This should sound familiar to anyone who’s come into contact with virtual reality in the last ten years. The reputation of VR photography and videography is therefore poor. This is particularly true for the 360 ​​degree format, which is mostly monoscopic, that is to say without a natural impression of depth.

But it can be done differently. Browsing Meta Quest TV recently for interesting content, I came across incredibly sharp, high-quality VR footage by a German VR photographer and videographer: Thomas Huebner.

His videos piqued my interest, so I reached out to Huebner to find out what cameras and processes are used to create his videos.

I was particularly taken with four videos. These are animated images on the one hand, and slideshows of high-resolution VR photographs on the other:

The photographs in particular have a strong suggestive power it makes me reevaluate the immersive potential of VR photography and videography. The environment feels so real in places that you want to touch it.

What if such sharp and realistic shots were one day possible with conventional VR cameras? We are still far from it.

High-end technology and lots of post-processing

For moving images, Hübner uses a combination of Canon’s professional R5 camera and accompanying Canon VR lens. This configuration costs around 6,000 euros. And the work only begins when the images are captured.

For post-processing, Hübner uses multiple layers of software: for stereoscopic alignment and cropping, stitching, denoising and image sharpening. A film filter was also used in the Pillnitz Palace images to extend the exposure time per frame and sunlight into the 3D image. 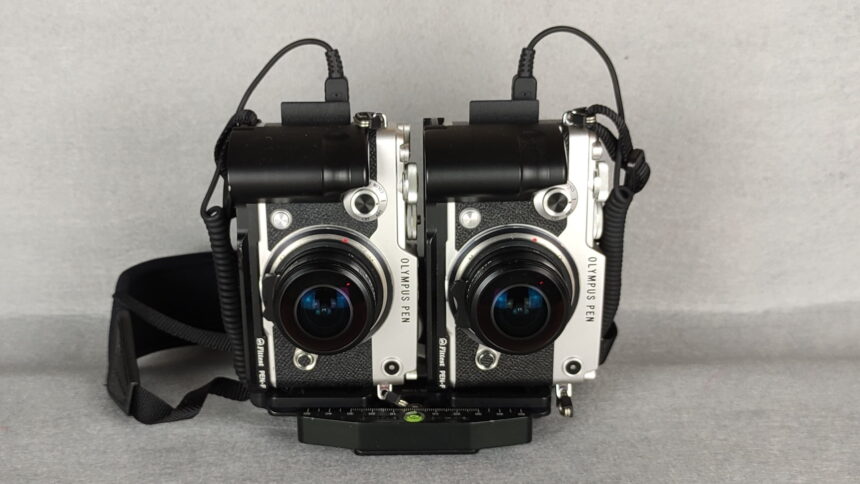 The VR photographs, in turn, were taken with a home stereo camera system consisting of two Olympus PEN-Fs, each capturing left and right images. Thanks to sensor displacement technology, the resolution of raw format photographs is about 100 megapixels per eye, which is why the images must then be scaled down. Again, several programs are used for post-processing, including the AI-based image optimization solution Topaz.

Huebner is a master of his craft.

“Explore camera features, just like every photographer should get to know their camera. I find out what the camera gives me with what settings and if I can create an enhancement with filters between the lens and the sensor,” he says. “With today’s software and hardware, I’m looking for an optimal and efficient workflow to achieve something worth seeing and, in video, to be able to render everything through the graphics cards.”

“I combine recreation in nature with technical challenges to improve quality. When hiking without a camera, I miss something,” says Thomas Huebner. | Image: Thomas Hübner

Its VR content, he says, is “in each case the result of what has been achieved from the respective technology, as well as the most advanced computer technology and software”.

Despite all his expertise, Huebner is not a professional photographer and videographer, and is only involved in immersive recording techniques in his spare time. In recent years he has widely taught himself these techniques through trial and error and by supporting other enthusiasts who share their experiences online.

He has been pursuing his hobby since 2010, triggered by the 3D boom, which quickly died out. When Google introduced the VR180 format in 2017, Huebner upgraded its Fuji 3D camera to a 180-degree camera by adding wide-angle lenses and wide-angle converters. It got into VR videography, or moving VR footage, less than a year ago with the release of Canon’s VR lens.

Huebner uploads his slideshows and videos to Meta Quest TV as well as the free VR video platform DeoVRwhich he says offers better image quality and is also available for Pico 4 and SteamVR.

For the future, Huebner hopes for cheaper 3D cameras for consumers and a renewed commitment from Google to the VR180 format. Then there might also be enough high-quality hardware for standalone VR headsets, which in turn would attract more consumers. Huebner also hopes that Canon, which has created a “really good solution”, will continue to invest in virtual reality.

However, it is also clear to him that VR technology must first become mainstream before VR photography can also develop further. “Only with a large user base will VR for consumers survive in the long term,” says Huebner.

You can find his movies on Meta Quest TV by searching for Thomas Huebner Dev or by clicking on the video links above. In the VR DeoVR app, you can find Huebner’s channel under HuebiVR.