The Owo Haptic Vest provides haptic feedback in VR with electric shocks up to your personal pain threshold.

The sleeved haptic vest sends electric shocks to the wearer to simulate the feeling of being shot or stabbed in VR games. Soft sensations such as a breeze or a hug can also be felt through electrical stimulation. Nine pulse wave settings allow for different sensations. Developers can also create “custom sensations” to integrate into Unreal or Unity projects.

The electrodes are placed in ten positions under the stretch fabric. The manufacturer, Owo, advertises high conductivity with resistance below 100 ohms. For good contact with the skin, undershirts are taboo.

“Players can feel the wind when falling freely from the bus in Fortnite, experience the feeling of being injured in-game, and the explosion of the enemy’s link when winning in League of Legends,” says the Malaga startup. , in Spain.

Among the “semi-native” supported VR games with emulated effects are some bigger names. These include Bonelab and Arizona Sunshine shooters, Beat Saber and Pistol Whip rhythm games, and sword fighting game Until You Fall.

To make sure the vest doesn’t go limp in the heat of battle, a USB-C charge lasts eight hours, according to the manufacturer. Available in nine sizes, it weighs less than 600 grams and connects wirelessly to the Owo app via Bluetooth 5.2 (BLE).

The app, available for Windows, iOS and Android, was developed in partnership with Overwolf. The platform of the same name integrates and monetizes applications, mods and private servers in the game.

VR analyst Brad Lynch reported after a test session at CES that he found the stabbing sensations particularly authentic. You wonder how many times Lynch has been stabbed in real life, but maybe he’ll come clean one day.

Appropriately, a demo includes something like a knife spinning after being stabbed through the body. According to Lynch, the system is less suitable for high-fives or back-slapping on the VRChat social app.

Blogger and VR developer Antony “Skarredghost” Vitillo says the feel is different from other haptic vests. Not only did he feel a tingling or superficial pain, he said, but the muscles under the skin also tightened.

Owo get under your skin

The result is that you feel the vibrations not only on your skin, but also in your body. Vitillo calls it a “real torture machine”. He calibrated the intensity of the electric shock on a case-by-case basis to find a compromise that wasn’t too weak but didn’t always reach the pain threshold, Vitillo says.

Lynch warned against setting the shock intensity too high: one person told him about a fall after all the electrodes caused simultaneous muscle contractions.

Cleaning and durability could also prove problematic. Gel patches that come into contact with the skin must be removed before they can be rinsed off with cold water. Vitillo also reported that the pads had slipped down his sleeve, which he had to correct after putting them on.

Owo costs 499 euros, but can be purchased at a reduced price of 399 euros if ordered in advance. Alternatively, it can be booked for 50 euros. Owo also offers a custom hex design for the first 2,000 vests (no returns). No shipping date has yet been set. 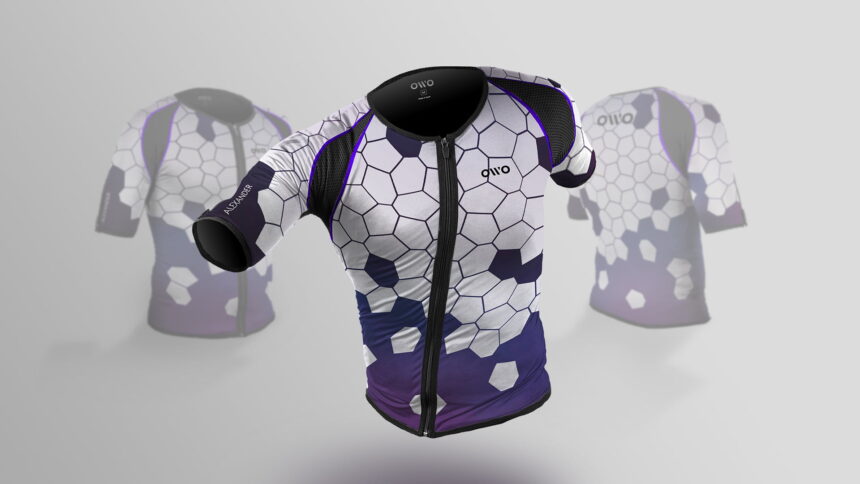 While the Owo vest still requires electrodes, there is already an alternative in the form of haptic gloves: AI Silk’s “Haptic Metaverse Glove” sends electrical feedback through coated fibers. The same fabric even follows the movements of the fingers.